It was a Friday afternoon in mid-June when I got a call from General Motors. “Jim, how would you like to join our group at the Calgary Stampede this year”, said the voice on the other line. Caught off guard, my jaw dropped and I couldn’t blink. After a few seconds, I accepted the invitation and within two weeks I was on my way to experience The Greatest Outdoor Show on Earth. GMC Canada has been a partner of the Stampede for over three decades so needless to say, I was excited and grateful to be considered. I, along with 15 other media reps, would experience the Stampede like a pro, getting a behind the scenes look at the Stampede and a front row seat to concerts, shows, chuck wagon races and the rodeo, of course. 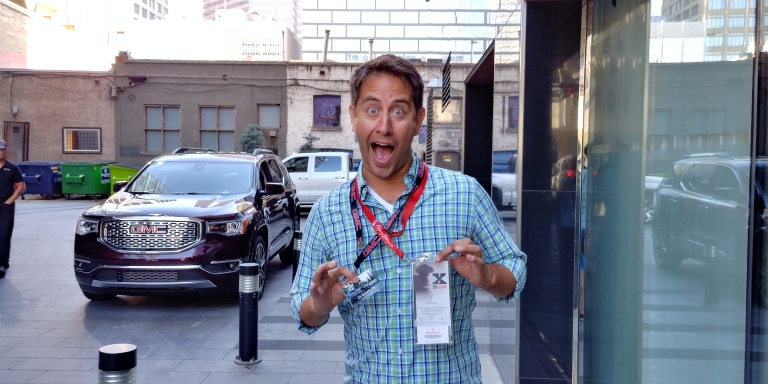 A bit of background. When i was a kid growing up in Toronto during the 80’s and 90s, I remember going to Canada’s Wonderland, the CNE and Ontario Place. I’d bee line to the splash pad and when I got a bit older, the roller coasters. As time went by, I realized that these were your typical amusement parks that looked like every other amusement park. Sure, they were fun but they didn’t really stand out. I started learning more about bigger, bolder festivals from across Canada such as the Quebec Winter Carnival, Winterlude in Ottawa and of course, the Calgary Stampede. These were the festivals that, to me, reflected the unique character of Canada itself. They weren’t just festivals with rides and food. These were unique experiences, spectacles people got super excited about.

The Stampede is a carnival atmosphere, complete with massive outdoor grills, one of the world’s largest rodeos, a midway, stage shows and concerts along with First Nations exhibitions. It’s so brash, bold, colourful, loud and unapologetic that I thought for a minute I was somewhere in the middle of Texas. Nope, I was in Western Canada, experiencing one of Canada’s most iconic travel, culinary and cultural events! Finally, THIS is the Canada I was yearning to hear, see, feel, inhale and live; an intense, proudly Canadian fervour with flags flying everywhere and polite, friendly compadres with a century of traditions under their cowboy hats and oversized belt buckles. For the first time in a long time, I was grateful at the thought that THIS incredible event was within my own borders.

Senses overload for sure, but here are 10 highlights from this unforgettable piece of Canadiana and experience of a lifetime.

I got a cowboy hat

You’re not really stampeding unless you’re sporting a cowboy hat. We headed to Smithbilt Hats to get measured, fitted and capped. Around since 1919, these guys have a long-standing tradition of creating quality hats with precision and care. In fact, they still use all original hat building equipment that founded the company!

There are thousands of hats to choose from but I went with a classic. The White Hat debuted in the mid-40s and has since become the symbol of Calgary’s hospitality. In fact, the White Hat is often given as gifts to visiting dignitaries. I loved the clean, classy look with the red ribbon.

Took in the rodeo

The sight of riders trying their best to outmuscle and balance on animals twice their size mesmerized me. These events require precision speed, skill and finesse, communication between the rider and animal and of course control and balance.

Behind the scenes tour of a live barn

Behind every horse, there’s a team of people who do everything in their power and energy to take care of it. These people live and breathe for their animals, making sure they’re taken care, fed, bathed, hydrated and treated with the utmost care and love. Horses are part of the family!

These beautiful animals were all too excited to see a new group of people enter their homes and give them even more attention than what they’re already accustomed to. Having only seen horses from a distance, getting the chance to go behind the scenes to see them up close, even feed them and watch them eat, drink and interact with each other and with the group was a truly memorable experience.

We were told that the chuck wagon races are a BIG deal. As a city guy, I didn’t understand why. From the outsider point of view, it’s a guy sitting on a wagon, directing four horses around the track with the aim of finishing first. But when you get the chance to see these races up close, it’s a whole new ballgame. I could hear the horses breathing, feel their hooves pound the ground, even shake it underneath my feet as they raced hard to the finish.

But what I learned was that chuck wagon races are taken very seriously. Not only have the riders, trainers and horses prepared and trained vigorously and tirelessly for them but with big prize money and bragging rights on the line, they’re races that breed legends.

I’m pretty new to the whole VR world. In fact, I’m not much of a gamer. But I know that virtual reality is all the rage and I have several friends who have given it a try and love it. Essentially, VR is a computer technology that uses headsets to make you feel as if you’re actually IN a virtual or imaginary environment. There are several games out there that offer a VR experience, including Star Wars and Need for Speed so it’s obvious that GMC and the Stampede would offer VR for chuck wagon races, right?

I had to try this. After getting a quick tutorial, I strapped in and raced against three others, all with the goal of finishing first in the chuck wagon race for the ages. After doing VR, I learned three things. One, I came in last. Two, I sucked at VR chuckwagon and three, VR made me REALLY nauseated. I couldn’t control my wagon or my horses and I kept bumping into the walls. In fact, the experience felt so real that I think I nearly fell off my real chair I was sitting on, in the real world. Sure, I couldn’t eat or walk straight for a while, but no regrets.

In Alberta it seems, you’re judged by not only what kind of vehicle you drive but also by how high you sit in that vehicle. That said, GMC showed off its 2017 fleet of trucks and told us to pick a truck and venture out on a road trip outside of Calgary.

From its Yukon to Denali, this line of GMC trucks don’t look or feel boxy, are comfortable to ride in, have more horsepower than I could handle (I didn’t realize I was speeding that much) and Terrain X for road surfaces of all kinds. I’m not an expert car guy but as a big road tripper who isn’t afraid of off-roading, I do appreciate being in a vehicle that’s designed to offer a smooth and comfortable ride no matter what terrain I’m driving on all while having super fast WiFI IN the vehicle. Smooth traveling + being connected and sharing experiences along the way instantaneously = awesome!

Horseback riding at the OH Ranch

Truly one of the most beautiful experiences I had in Calgary was two hours south of the city, at the OH Ranch in Longview, Alberta. Here, I got the chance to do something I had never done before, horseback riding.

My mare, Matty, was a bit grumpy at times throughout the two-hour trek but she was gentle, guiding a very nervous me deep into the gorgeous Alberta countryside. I truly value experiences like these because they force me to look around, soak it all in and really appreciate where I am and what I’m looking at. Unforgettable to say the least!

With plenty of rides and games on the midway, it’s easy to lose yourself in the action. It’s definitely a fun place to be and enjoy the Calgary summer nights. As for the food, when you’ve got Rabbit Pizza, Canadian Bacon Pickle Balls, Crispy Chicken Feet on a Stick and Deep-Fried Jell-O on the menu, things could either be going really well or really, well, not so good.

As for the entertainment, I have to admit, the Stampede really delivered. The grounds have several stages that hosted several performers including Nelly Furtado, Alessia Cara, Jann Arden, Brooks and Dunn and Johnny Reid. Meanwhile, you can’t talk about musical performances without mentioning the Stampede Showband. Made up of 150 community youth, it’s the only 5-time World Champion of Marching Show Bands.

It’s very easy to overdo it on the midway. I’d like to see you try to resist the aromas of grilled sausages and chicken. But if you’re looking for a more formal dining experience, look no further than downtown Calgary. There’s no shortage of great food joints in Cowtown, especially if you love meat. Hit up The Guild for a solid carnivorous dining experience in a masculine setting. The staff here is all about local beef, game and fowl and cooking it all using traditional cooking techniques over wood and coal.

Charcut Roast House is another Calgary favourite that features delectable mains and irresistible desserts. Headed by John Jackson and Connie Desousa, this place is easily one of the most beautiful and delicious restaurants not only in the city but the country. From the reclaimed local barn wood panelling and mason jar chandeliers to farm-fresh products, house butchered meats and homemade preserves, Charcut also has Canada’s first beer steward who oversees international brews. From the tzatziki drizzled crab cakes and succulent Alberta beef atop fresh potatoes to the incredible blueberry cheesecake, Charcut is unmatched in quality, ambiance and flavour.

And to top it all off, Nashville North madness!

Where to start with this place? Simply put, this is a country music version of an out-of-control rave. Doing this Stampede institution #likeapro and getting VIP access was awesome. Sure, there are a lot of people in their late teens and 20s that made me feel old but this place didn’t make me feel out-of-place.

Located in a big tent in Stampede Park, Nashville North is full of live music, dancing and alcohol. It’s 10 days of Ibiza-like partying with up to three acts per night. It’s entertainment on steroids and red bull combined.

Have you been to the Calgary Stampede? Let’s hear it, what did you get up to? Share your experiences below because I have a feeling that no two Stampede experiences are quite alike.

Hey y’all. I’m Jim. Cute pic, no? That kid went on to spend 16 years in the broadcast media world before starting up Travel Mammal, a site dedicated to travel, food and cultural experiences.

Travel Mammal isn’t about the selfie or checking things off a list. It’s about experiencing both the journey and the destination. To breathe, learn and really absorb what’s around you, in the moment and experiencing in a way that is both memorable and meaningful.

This site uses Akismet to reduce spam. Learn how your comment data is processed.

“The photographs Jim took during his travels were remarkable and highlighted the east coast of the province beautifully”.
Anna-Lee Vienneau, Tourism New Brunswick

“His writing, paired with mouth-watering photos has made his Best of Toronto lists a hit!”
Erica Pannozzo, Content Manager, Yellow Pages Canada